The CS90 is the first Omni broadband sonar on the market. The world’s first composite transducer makes it possible to transmit and receive in a wide range of frequencies, in fact, 70-90kHz! This makes it possible to achieve high resolution on longer ranges as well as tuning the frequency for better detection or avoiding a noisy source such as another echosounder or any other acoustic source.

The CS90 also has the latest Winson SW enabling the user to view the various windows on separate displays using the new docking feature. Another great feature with the new SW is that it will ping all beams at the same time reducing the ping rate and increasing the update rate on the screen dramatically. 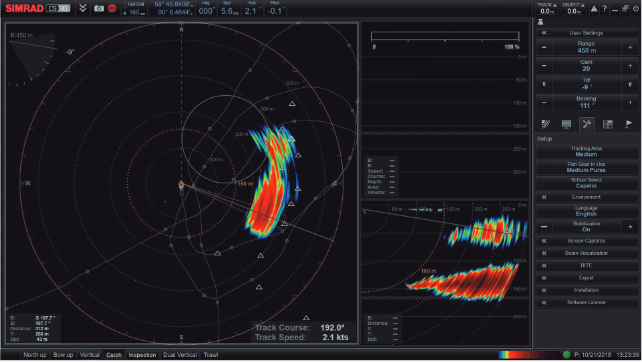 The CS90 is a broadband sonar capable of transmitting between 70 and 90kHz. It features the new operating SW and is optimized for the new joystick operating panel. This makes the CS90 very efficient to use during purse seine operation when a lot of equipment must be operated at the same time. 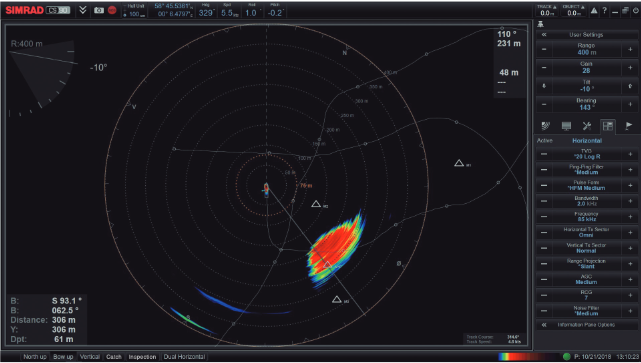 Notice the bandwith here is 2kHz with a center frequency of 85kHz. This can be adjusted between 70-90kHz.The CS90 is an Omni broadband sonar with composite transducer. Here is an example from Mackerel fishery in the North sea. The CS90 has the new Winson 2019 operating SW with several benefits.

The current operating software in Simrad sonars has been a tremendous success with its intuitive and easy to use interface. Now it is time to take this success to another level by introducing the new operating software already operational in our echosounders, catch monitoring systems and SN90 sonar. This will complete our mission of having one unified interface between the user and the product regardless of what product you are operating. Great new features are also a part of this upgrade.

The new “docking” function enables the user to take any window and place it on a separate screen or display. If you move the vertical view to another display, it will automatically scale the window for best viewing of long-range in shallow water for example.

“ALL IN ONE PING”

Modern sonars today use multiple pings to generate various views. For example, one for the omni 360° view and maybe two different vertical views are three pings, now all three will be transmitted and received in one ping. This dramatically improves the update rate on the screens giving a more real-time information.

The new operational software is now enabled to record real-time situations. Before, only screen captures were recorded. Now the real echoes are recorded making it possible to replay sequences like in real life. During playback vital information can be viewed for training and/or troubleshooting purposes.

The tracker function has been further developed and can now utilize information from both the horizontal and vertical ping.