The new software version 2.0.1 which was recently released, adds value to all Simrad EK80 systems by introducing new functionality plus including some bug fixes. This is a 64-bit installation for Windows10 and it is recommended that all users update their software to this latest version. After the update is completed, it is recommended to perform new system calibrations.

Software versions for the transceivers are included with this EK80 release:

Software version for ADCP transceiver/transducer in this release:

EC150 fixed timetagging with Aux remote synchronization. Users may contact their local support for upgrading from versions prior to 2.43

Some new functionalities are:

Furthermore, the following specific improvements have been made:

The following specific bug fixes have been made: 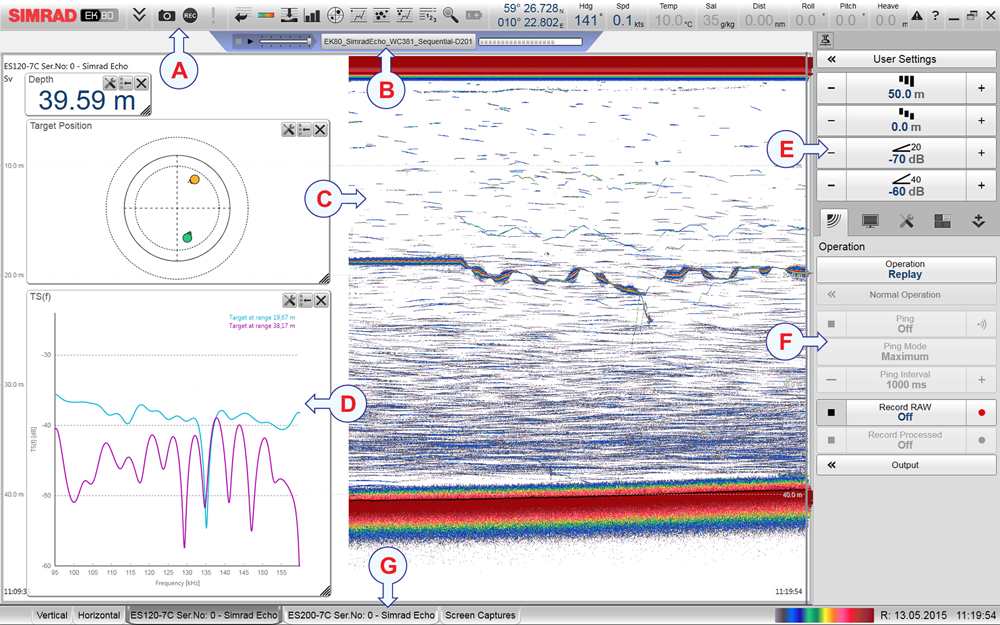 The reference manual for this release is included on the EK80 software media (USB flash drive) and as context sensitive on-line help. Raw file format descriptions can be found in the Interface manual, a new manual part of the end-user documentation.

The Simrad EK80 is a high-precision scientific echo sounder and ADCP system designed to quantify and monitor underwater ecosystems. The Simrad EK80 is a modular system capable of operating several different transceiver and transducer combinations, all through the same operator station.

Based on more than 60 years of research and development in close collaboration with leading marine scientists this wide band echo sounder system has succeeded the famous EK60, which became an international standard for fish stock assessment. The Simrad EK80 is now a wideband system with an operational range from 10 kHz to 500 kHz. Its extreme range resolution and improved target characterization allow for a wide range of oceanographic applications.

The system operates with single and/or split beam transducers and provides you with a dedicated built-in application for calibration. A wide selection of high-quality accurate surface- and depth transceivers and transducers are available for a flexible system, capable of integration on sensor platforms from small to large. Several transceivers are well suited for permanent installation onboard a research vessel but still compact and a natural choice for portable use.