The new software version 1.4.2 which was recently released, controls all functionality and adds value to all Simrad MS70 & ME70 multibeam systems. This software version requires Microsoft® Windows® 10 operating system. Unless the existing Processor Unit already uses this operating system, it must be upgraded. It is recommended that all users update their software to this latest version. After the update is completed, it is recommended to perform new system calibrations.

Note: Make sure to install the image provided for the topside computer following the specific recommended procedure for updating the image. After the update to v.1.4.2 is completed, there are a few elements which are essential to be performed before using the Multibeam Processor Unit. 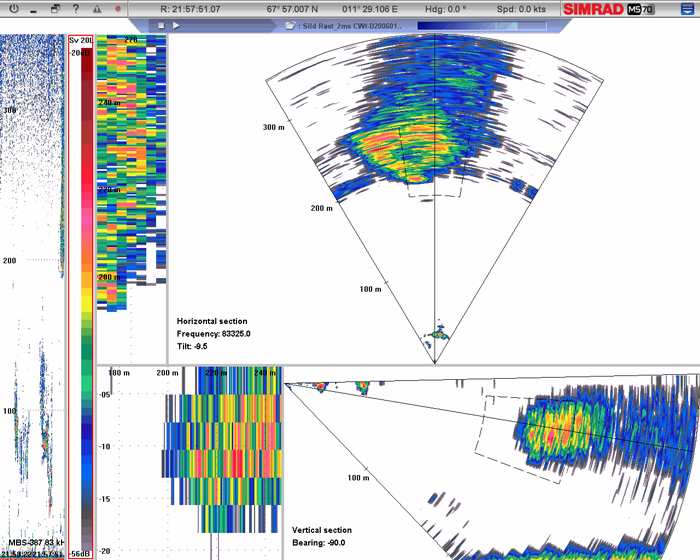 Simrad is a principal manufacturer of scientific echo sounders and instruments for fishery research and underwater science applications used by leading marine institutes since the 1950s.

The Simrad ME70 is a high resolution Scientific Multibeam Echo Sounder specially designed for collection of data in the water column. The Multibeam Echo Sounder combines the large and flexible sampling volume of the Multibeam swath with the accuracy of the quantitative scientific sounders. A Bathymetric option is also available and will give a high-resolution seabed mapping capability and the possibility of studies the fish habitat. The system has a high operating flexibility and includes a configurable wide fan of stabilized beams for e.g., fish behavior studies and fish school characterization. A sector of these beams can be configured as split beams providing data for single target analysis such as target strength measurements and target tracking. The sector of calibrated narrow split beams with low side lobe levels and short pulse lengths allows for accurate biomass estimation very close to bottom. The ability to adjust the athwart ship center angle of the fan enables the user to use the system for studying fish close to ridges. The design also allows for using all beams over the full frequency range pointing in one direction for frequency comparison.

The Simrad MS70 offers a new dimension to Underwater Science. It provides an acoustic matrix of stabilized and calibrated beams for biomass estimation, fish school characterization and behavior studies. The transducer array is normally mounted on a drop keel, which allows it to look horizontally. The Simrad MS70 allows characterization and volume estimation of a school of fish using only one single transmission. Schools of fish can be tracked, followed, and studied using multiple consecutive transmissions. As a consequence of the horizontal transmission using narrow beams, the MS70 allows users to detect and characterize schools of fish even very close to the sea surface. This allows the MS70 also to provide more accurate data. Since a school of fish can change its structure several times during the time other systems need to cover the school. Multiple consecutive pings enable the MS70 to provide true 4D data, where time is the fourth dimension. This allows for improved characterization of school structures that are changing over time.