Olex is a unique system for navigation and charting, developed by the Norwegian company Olex AS. The system is used in fisheries, aquaculture, and maritime contracting, and consist of three main elements:

Olex calculates a sea floor map using data from GPS and echosounder. For each new measured depth, the map improves. The survey takes place automatically and requires no operation.

The sea floor map can display in 2D with contour lines or relief, and in 3D with a virtual camera which can be used to look around the seafloor. Bottom zoom is used to highlight selected depth areas. In addition comes special functions like calculation of water and bottom mass volume, and tools for searching and removal of bad measurements. 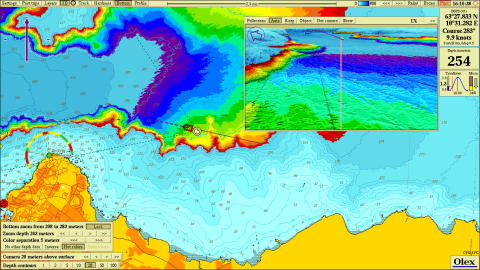 Olex is designed for optimal use with easy operation:

Software updates from Olex are free of charge.

The system works under UNIX, for the time being, Linux. All software is manufactured by Olex AS, except the tide calculations which are handled by XTide2 The system continuously upgrades its own world map. The measured data are always ready for use. 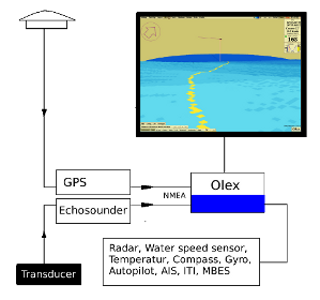 The system runs with electronic vectorized charts. Effective use of digital charts requires fast computer processing. The chart cells are converted into an internal compact format, where they are kept in different crude scaling levels. To achieve this, the coastline and other details have to be recalculated and reduced. In this way, the time and memory requirement of the visualization program are kept at a fairly limited and constant level at any zoom scale. The screen will not be filled up with unnecessary information. In the crude scaling level, the visualization program scales the charts in several steps. In this way, a fine and seamless interactive scaling is achieved, without any annoying details related to the organization of the cells.

By continuously recording depth and position the system builds a database where the sea floor is divided into squares of any resolution. The default resolution is 5X5 meter, an adjustment of today’s GPS equipment, but the user can easily create new sea floor databases in any resolution down to a few cm. The squares may be considered as a grid covering the surface of the whole earth. They contain a depth value which is either measured, calculated or unknown. New measurements will result in a recalculation of the unmeasured squares in some radius from the considered point.